2 years ago · Andy · Comments Off on Living with Anxiety

The following blog was submitted by a member of staff at Arch Care Services. They have asked that they remain anonymous.

I had a very normal upbringing with loving, supportive parents, but everyone always described me as an anxious child. I remember distinctly worrying about the end of the world when I was 4 or 5 years old, and I developed a form of social anxiety at a relatively young age which manifested as a profound fear of looking stupid or annoying people. I didn’t really know what it was at the time, I just remember monitoring my words and actions closely and being hyper aware of how other people responded to me. In fact, one of my earliest memories of childhood was being driven home from school by a friend of my Mum. She was having a conversation with a friend in the front seat while I sat in the back and I attempted to join in, which made them laugh. Looking back I can see that it wasn’t malicious, they were finding humour in a child making an adult-like comment, but that stayed with me, and I felt nervous about making comments in adult conversations from that point onwards. That should tell you what kind of child I was!

School was always a challenge for me.

This continued throughout my childhood, and my overriding memories of school are of feeling anxious, uncomfortable in my own skin and intimidated by kids my own age and how easily and smoothly they seemed to socialise and make friends. I wasn’t miserable by any means, I was generally quite positive and cheerful in most aspects of my life, I had friends and was doing fairly well academically, there was always just this nagging sense that I didn’t quite fit in, which led to a couple of years of over-compensating, acting up and behaving badly in an attempt to make friends. I thought that if I could be loud and funny and disruptive then this would cover up my insecurity, but really it just made me feel worse. Knowing what I know now about mental illnesses, I can see that I was suffering from an anxiety disorder, but I didn’t have the language or the experience at the time to identify exactly what it was that I was feeling, I just kind of assumed that everyone felt that way. 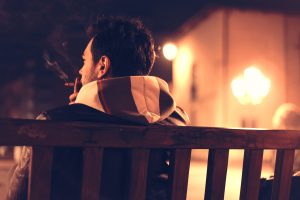 I spent a lot of time alone in my first year of university.

When I reached university at age 20 my mental health really started to decline. I suddenly found myself in a huge city for the first time, surrounded by new people who all seemed so much older and more comfortable than I was. For someone with some hang-ups around fitting in and making friends this was a terrifying situation, I was overwhelmed by the constant need to be social and present this image of myself that was polar opposite to the way that I was feeling. The pressures of the course and my studies were fine, I could handle that, but having to constantly present myself in the way that I wanted to be seen by my peers, living in the same building as a collection of loud, drunk strangers, having no retreat where I could go to hide and recharge at the end of the day, that was a struggle. And to make things worse, I suffered from an unexpected bereavement at around the same time, which only exacerbated my blossoming mental illness. I started to find it difficult to spend time with people, which led to me finding it difficult to go outside, which eventually led to me finding it difficult to leave my room at all. My laptop and my DVD’s and my bed all became my comfort blankets and my safe space, which I became reliant on in unhealthy ways.

It all reached a tipping point one day around exam time. When I was anxious I found revision comforting because it allowed me to lose myself in a world of logic and facts for a few hours, which blocked out some of the cyclical negative thinking that had become my normality. I also used to gravitate towards a nocturnal lifestyle, staying up later and later each day and sleeping for longer and longer, or managing on very little sleep when I had lectures to go to, all so that I didn’t have to interact with people. During exams these two factors coalesced into manic revision sessions, hours spent hunched over a textbook in my poorly lit room in the halls of residence scribbling notes and drawing mind-maps, downing cups of black coffee until my hands shook and I felt sick. On this particular night I had been writing for what felt like a couple of hours and decided to take a short break, but when I looked at my clock I found that I had been scrawling notes in my exercise book for 9 hours without stopping. The sun was starting to rise outside, and I hadn’t even noticed that it was night time. I went into the bathroom to splash cold water on my face and caught sight of myself in the mirror, and for a terrifying moment I didn’t recognise the reflection staring back at me. I had gained weight, my face was grey and drawn and I had been wearing the same clothes for two days. Which also meant that I hadn’t been outside or spoken to anyone in two days. Before this I had always taken a lot of care of my appearance, and I was shocked at how terrible I looked, and how far I had allowed things to decline.

I found it difficult to make friends and fit in.

I skipped my lectures that day and went for a long walk along a river near to my student accommodation. For the first time I stopped and examined my thoughts and my behaviours and started to understand that this wasn’t normal, that I wasn’t doing alright. Up until that point I had never really considered that there might be something bad happening to my mind, I just assumed that this was what life felt like, but as I watched the other students walking to lectures, looking fresh and well rested and chatting happily to their friends, I realised that this wasn’t the case. They were carefree, relaxed and happy. It didn’t look like they were struggling to speak to each other. They were wearing clean clothes and smiling, and I couldn’t remember the last time that I had felt how they looked. I went home and showered and changed my clothes, and then I booked a doctor’s appointment. When they asked what the appointment was for, I told them that I thought that I might be depressed.

I actually ended up being diagnosed with an anxiety disorder, and was given a prescription for Citalopram, one of the most common kinds of SSRI based anti-depressant. It was a relatively low dose, but I was told to take it daily and to come back in six months. I had the usual reservations about medication, and was worried that it would lead to personality changes or would make me dull or zoned out, but once I had been taking them for a few weeks I started to notice the changes. I didn’t feel any different in ways that I could easily identify, but I wasn’t worrying as much. Spending time with people was still tiring, but it wasn’t an anxiety minefield in the way that it once was. I could go shopping again without having to spend hours working myself up and mentally preparing. I would deliberately test myself by sitting and thinking about all the things that used to make me feel nervous and twitchy, but they didn’t have the same impact, it was like the part of my brain that had caused me to overthink and obsess and worry had been switched off. The knock-on affect of this change was significant. My sleeping improved, I started eating better and spending more time outside. I made friends and chose to leave my room because I wanted to, rather than because I felt like I should. It felt like a grey fog had been lifted from my eyes and everything suddenly seemed clearer and brighter, and I had the sudden realisation that this is what life is supposed to feel like, this is how other people experience the world!

Things aren’t always perfect, but i’m happier than I’ve ever been.

A lot of people have some negative impressions of anti-depressant medication, but they gave me my life back, and gave me the mental freedom that I needed to identify problems and make changes in an effective way and with a clear head, changes that would have been impossible a few months prior. When I decided to stop taking the medication around a year later (with help from my doctor, you should never stop taking medication suddenly and without seeking medical advice), I found that the feeling persisted, because I had made changes to my life and thought patterns that stayed with me.

That was a long time ago now. I’m older and wiser and have a career and a family and that dark patch seems like it was a lifetime age. Don’t get me wrong, I still have bouts of anxiety, I still struggle with social situations sometimes, and I’m still prone to obsessive, circular thinking when things get stressful. Once I even had to take some time off work and go back onto the medication for a while. But nowadays I can understand my anxiety, and generally we’ve found a way to co-exist peacefully. I think that I’ll always suffer with it in one form or another, and part of me thinks that it has taught me some really important lessons about myself and given me insight that I wouldn’t have without it. I’m now confident that I have it under control; I know my triggers, I know when I start to feel low and the steps I can take to manage it, and I’m conscious of when I need to practise some self-care. Anxiety may be a part of who I am, but it’s not the main part.

If you think that you may be suffering from anxiety, depression or any other mental illness, you can speak to your GP and ask for help, or contact the Samaritans on 116 123 if you need someone to talk to. If you ever feel suicidal or like you may harm yourself or other people, you should always call 999 immediately.